PRATT SHOWS 2021
PRATT SHOWS 2021
Portfolios
Events
Presentations
About
Filter
Search
Login
Portfolios
Events
Presentations
About
Filter
Search
Login
Idols
Eleanor McGuirk
School of Art / BFA Fine Arts (Drawing)
Eleanor McGuirk is a multimedia artist based in the New York City metropolitan area. Her most recent artwork illustrates older women in a mythical, whimsical and symbolic environment. Her goal for this series is to celebrate older women in a culture that often ignores them. She is influenced by a plethora of art and design styles from all over the world and across eras. Eleanor will graduate this May with a Bachelor of Fine Arts in Drawing and a minor in Art History.
https://eleanormart.wixsite.com/mysite
/ eleanormcguirkart@gmail.com
Our Lady of Insight, 2021, Watercolor, colored pencil and acrylic, 14” by 11”
By Idols 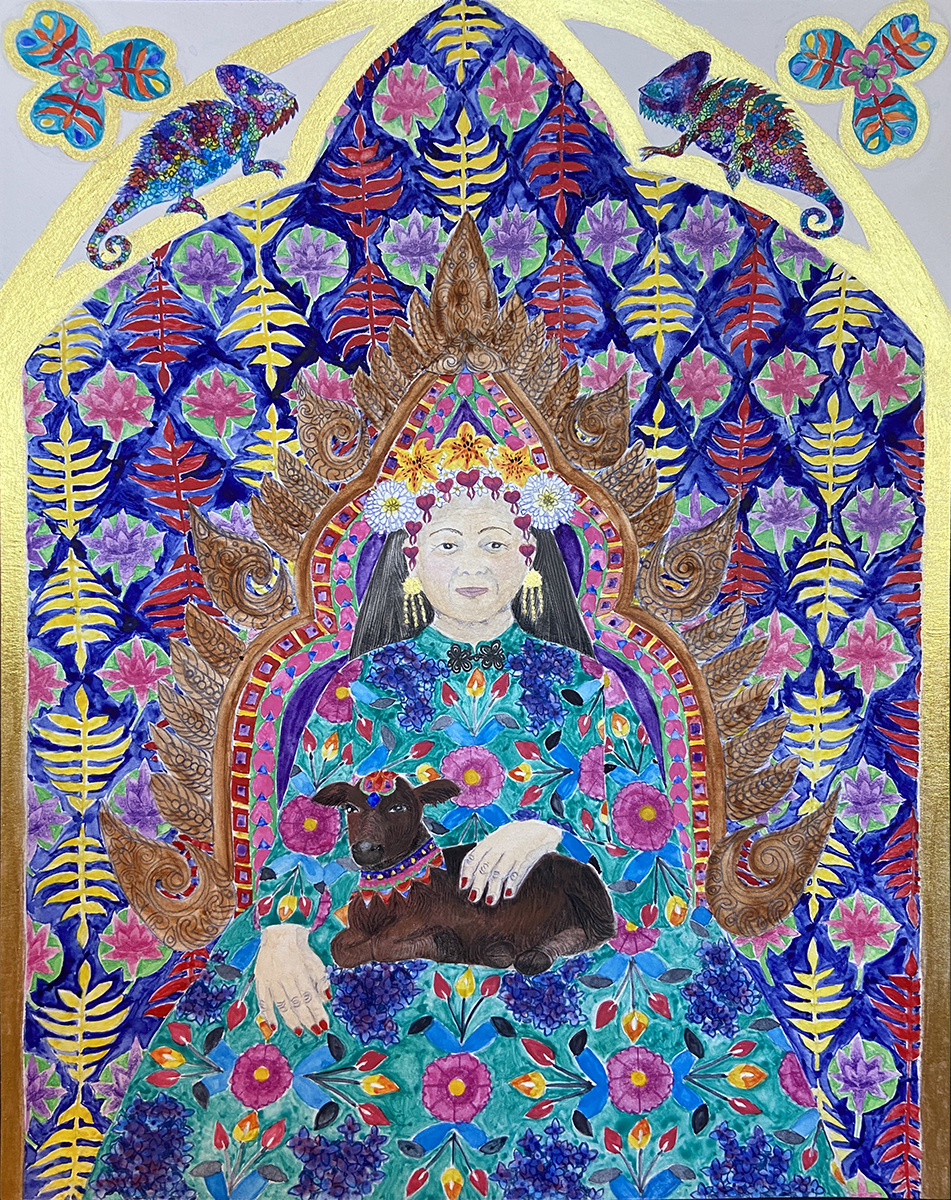 Goldfinch, Wren and Chickadee, 2021, Watercolor, colored pencil and acrylic, 12” by 9”
By Idols 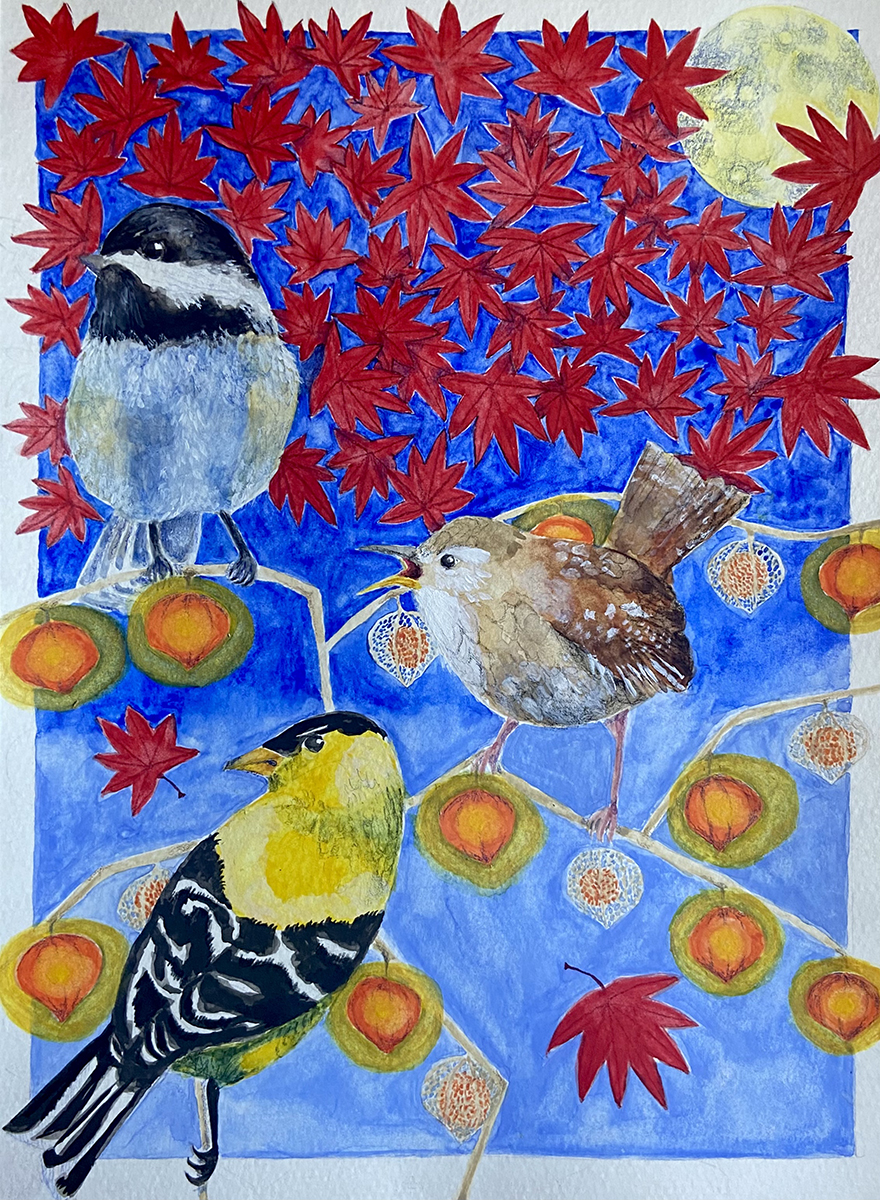 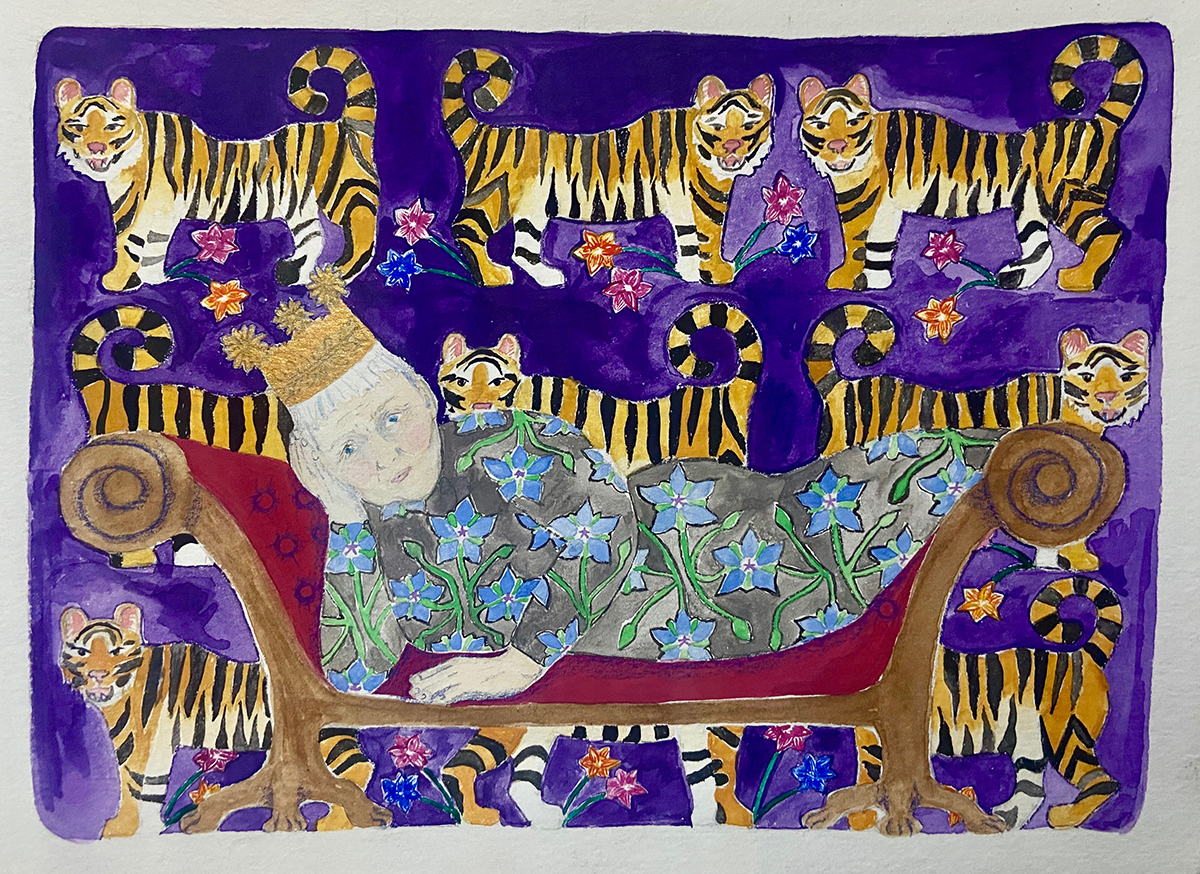 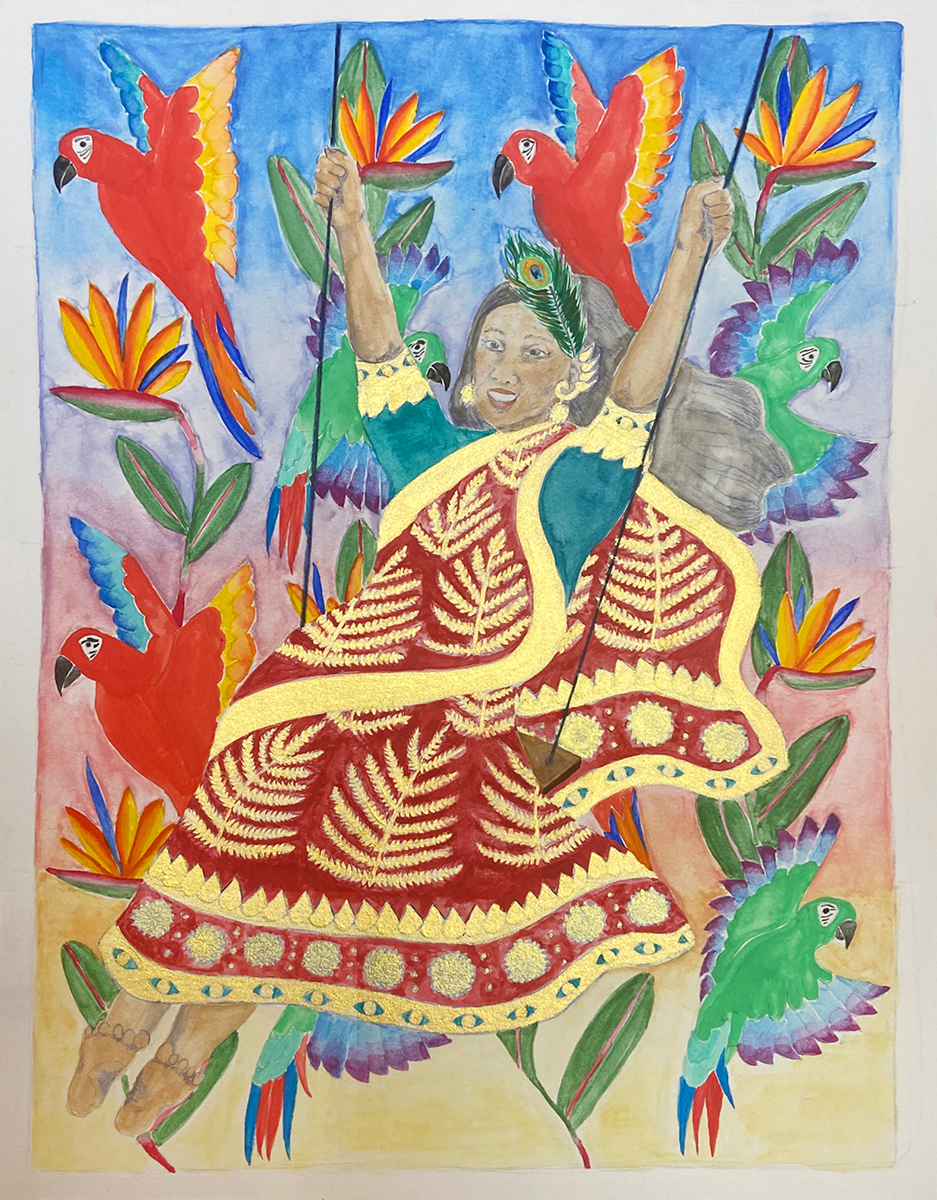 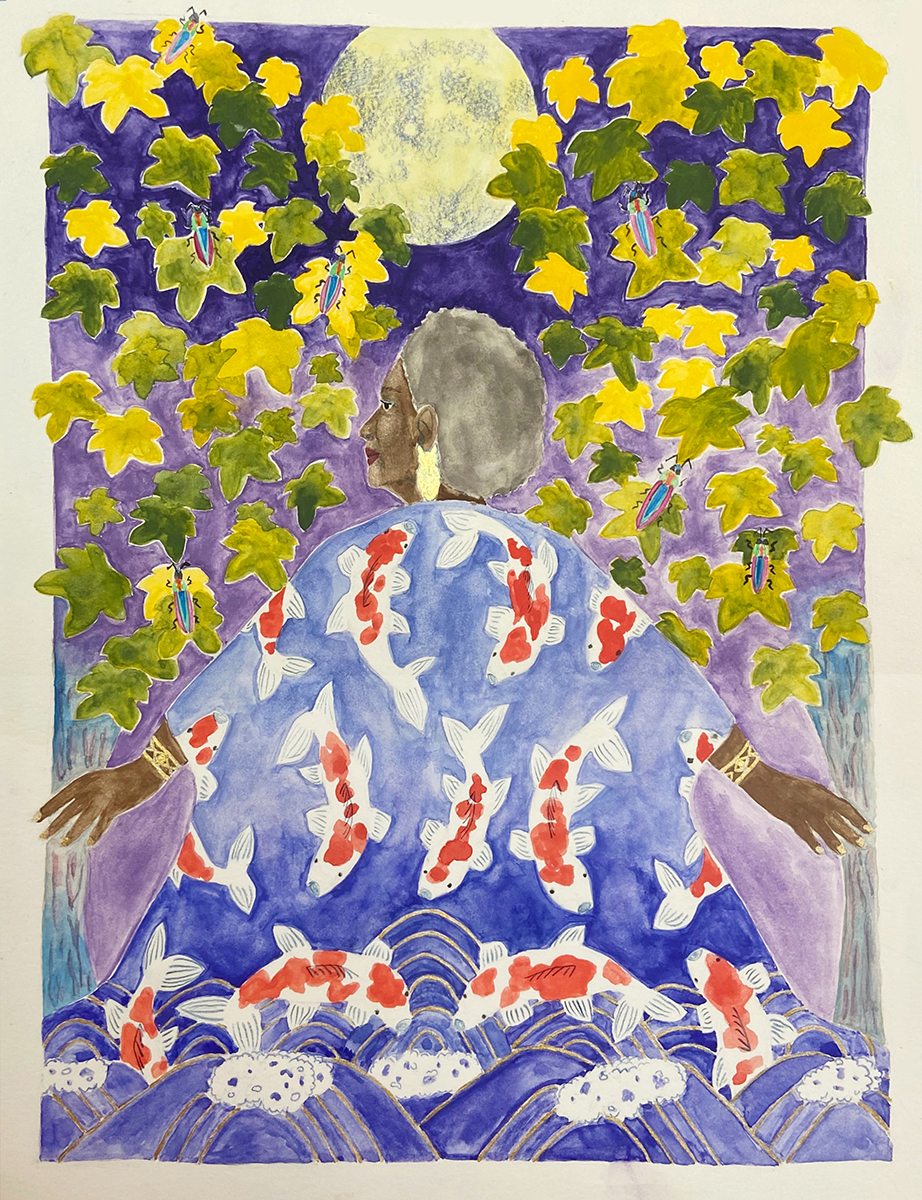 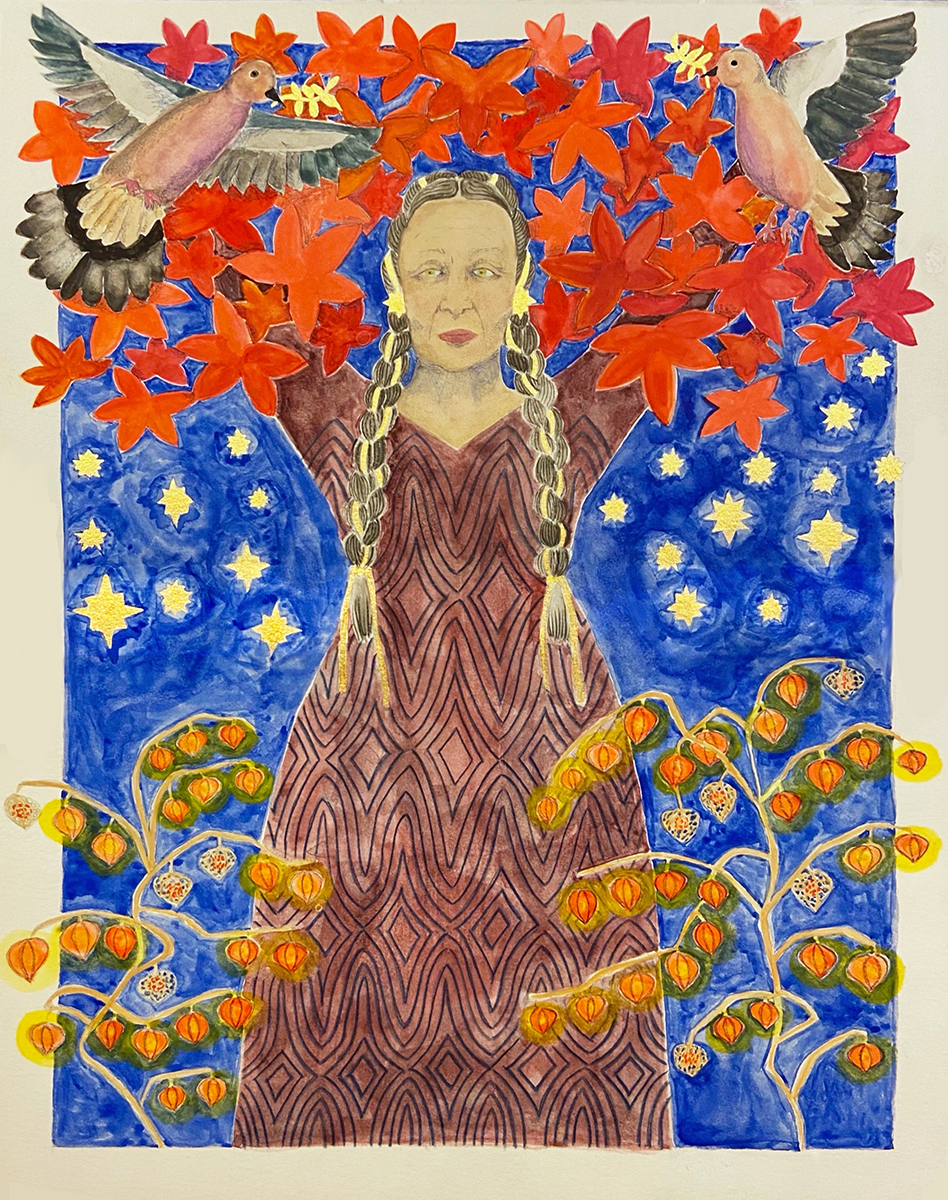 Artist Statement
I am working on a series of portraits of imagined older women. My series focuses on the materiality of the media, creating colors and textures, and the concept of honoring older women. My work combines visual pleasure and social ideas. During this trying time, I find creating these pieces to be much like engaging in a soothing and satisfying jigsaw puzzle. More than anything, my goal is to intrigue, evoke a feeling of serenity and convey the charisma of these women.

I use my interest in textile design, bright colors and detailed graphics to celebrate these women and their fictional personalities that I’ve constructed. I am influenced by an abundance of art movements, styles and artists. Among them are Japanese, Indian and Mexican traditional patterning, Japanese woodblock prints, the Arts and Crafts movement, and artists and illustrators like Gustav Klimt, Patricia Polacco, Erté, Jacqueline Ayer, Molly Bang, Minnie Evans and Jocelyn Hobbie. Such artists and design styles have a fantastic handling of color, line and composition.

My characters are imagined and are inspired by personal connotations, and cultural symbolism. Women become more and more invisible to society as they age. We place a lot of value on looks and desirability and there is a great deal of pressure on women to stay “youthful” looking, no matter how impossible the feat. I want this series to be an exuberant, playful way to honor older women.
Thesis: Idols
Quarantine has forced me to be young in a different way. I had to return home with my social life in limbo, my plans interrupted. I felt like my youth was being wasted. I felt frustrated that I was no longer in my early twenties and hadn’t accomplished more with my life. But then it made me wonder, does it matter? Is there a due date for such things? Why do we value youth so heavily and why are women programmed to obsess over it? I never had an older woman as a role model in my life. Neither grandmother was really present. I often think about what it would have been like if she were a meaningful role model in my life. Life gets more complicated when you’re an adult, and I wonder what sort of advice or experiences she’d offer. To this day I wish I had an honorary grandma. Maybe someday I will. I have come to realize over my fairly short life that we value women in strange ways. There is a window of time where they are considered most valuable to society, but as they age we treat them with less importance. Above all, we value youth in women. I have created this series as an ode to older women, as a celebration of how important they really are.

In my exhibition, I mix this concern with an interest and knowledge of art history, and art and design movements. I represent imagined women in fictional, whimsical, and playful settings. Having grown up in a commuter town, I took the train into Grand Central every weekend I could. Being in the city really felt like visiting a universe that represented every corner of the globe. It was truly fascinating to me and I longed to live there. My mom received publications from a variety of cultural institutions around New York City, and brought me to exhibits at art museums very regularly. The Met was always my favorite because it had a lot of everything. I remember being particularly entranced by the European Medieval, 19th and 20th century American, Asian and Middle Eastern wings. Those art styles were particularly transportive, serene and rich in color and detail. I would buy postcards of my favorite pieces and stick them all over my walls at home. Depending on where I taped them, I could create corners that put me in entirely different worlds and moods. The flatness and attempts at perspective in medieval art felt dreamlike; the hills and cypress trees, and little men climbing winding paths. The Japanese artworks were highly atmospheric; little slices of life that were so gorgeous, a cat stalking a spider on a tatami mat with the sun setting on a village outside the sliding door. Persian miniature paintings felt truly royal, dripping with color, ornate patterns and endless attention to detail. I remember them reminding me of incense.

I have kept and cultivated this fascination with art styles from everywhere. I spend many hours going down rabbit holes of numerous art styles. I save textiles, designs and architectural elements, research their context and origin and pair them with symbolic plants and animals. I submerge each woman into her own particular environment, bringing respect, power and meaning to who she may be. I have used various kinds of cultural symbolism and connotations to develop meaning in this series. I have used flowers like amaryllis to mean strength, and animals like parrots to represent pride. Some of my pieces have more of a general theme that is communicated through personal imagery.

For instance, Life in Death, Stability in Turmoil (Chinese Lantern plant, Sweetgum tree, Mourning doves) uses the autumn leaves, lit Chinese lantern plants, and the woman grounded as a tree to convey an idea of light in darkness or a person who is a rock in difficult times. The grandmothers I have known seem to be an oasis of stability: somewhere to go when times were rough. A grandmother is someone who sees things as they are and, unlike parents, is one degree separated enough to have clearer insight. The figure in this piece is inspired by Spanish Colonial Santos, which can be stiff or muted in color, but have a sense of groundedness.

In Our Lady of Insight, I want to convey an idea of higher meaning in a bold yet calming color scheme. I use religious symbols like the water lily from Buddhism, the cow from Hinduism and the palm leaves from Christianity. In Buddhism, a water lily represents enlightenment as it grows from muddy, murky waters. The cow in Hinduism is affiliated with the goddess Aditi, who is the mother of all gods. So the cow is seen as a maternal figure, sort of like a grandmother. In Christianity, a palm leaf represents peace and eternal life. Palm leaves are distributed to congregations on Palm Sunday as a reminder of how, in the Bible, Jesus overcame death. I paired such religious iconography with the gothic arch, often seen in cathedrals, and the throne, inspired by Thai temple architecture. I chose imagery I knew would have significant connotations to give this woman an inherent sense of power.

Eyes- Clairvoyance, Parrots- Pride, Peacock- Luck (Hope for the Future) was influenced by Mughal paintings and an oleograph, in particular, by Raja Ravi Varma, which I used as a reference. The movement of the sari in the wind really conveys a sense of carefree joy. I combined this positively jubilant activity with parrots, in flight, much like the woman on the swing, and birds of paradise plants, which by name felt very fitting. Not only are the parrots, the peacock feather and this particular plant bright in color, but they symbolize cheerful attributes, as shown in my title. The sunset in the background is meant to convey new beginnings.

A year has passed since I relocated home and made my childhood desk my studio. I have learned about an abundance of art styles and have adapted them into my work. This body of art explores the ageism and sexism so tangible in American society, and strives to honor and experiment with a plethora of artistic styles from around the world. This series is, and continues to be, my oasis of calm. Maybe drawing these older women grounds me as I try to figure out adult life and am reminded that there are so many who’ve navigated womanhood before me and with me. Creating these “Idols” reminds me of my own worth. Someday I’ll be like the women in these drawings, having lived rich lives and with plenty more to come. Like these women, I will surmount many challenges, and be all the stronger because of them.